According to Flight Global, the two AirKrafts, as they are affectionately called in reference to team owner Bob Kraft, both spent a quarter-century flying passengers for American Airlines. The two 767s, N366AA and N39367, were both delivered to American Airlines in 1991 and retired in early 2016. Both planes are powered by General Electric CF6 turbofan engines. Flight Global’s metrics show that each of the 26-year-old planes is worth around $5.5 million on the open market. The team did not disclose how much it spent to refurbish their interior accommodations. These commemorative models celebrate the New England Patriots and the history they have made by being the first NFL team to ever own its own fleet of aircraft. Buy one for your own collection today! 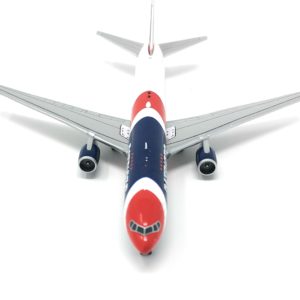